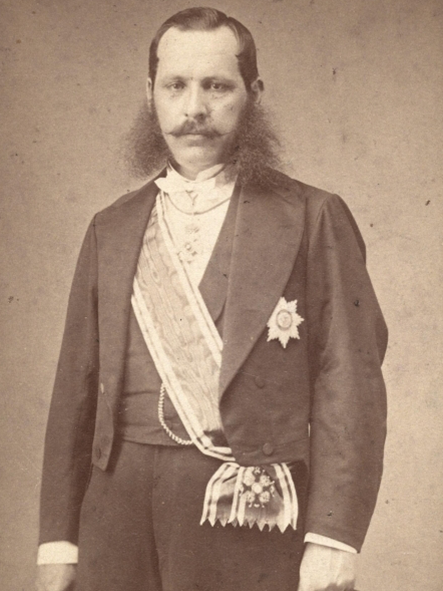 Politician Jovan Ristić is one of the most significant Serbian diplomats in the history. Member of Serbian Learned Society and later the Serbian Royal Academy,he has been a member of a council of regency twice, during the minority of young kings and has been the Prime Minister in Serbian Government four times, Foreign Minister and the recognized founder of the Liberal Party.

Jovan Ristić was born in Kragujevac, on January the 4th (Julian calendar) 16th of January (Gregorian) 1831, he died in Belgrade, on August 23rd (Julian) September the 4th (Gregorian) 1899.

Jovan Ristić, son of Rista and Marija grew up in poor family. He lost his father at early age, and in his „Testimony“ Ristić wrote, among other things:

„Above all, I felt the need to comply with God’s path, I am thankful He pulled me out of poverty and brought on the path which enabled me to take certain place in civil life and politics and make living in difficult times.“

Upon finishing studies in France and Hydelberg, he came back to homeland and he soon became the head of the Serbian diplomatic agency in Constantinople. During his stay at Turkey from 1861 to 1867 he successfully negotiated withdrawal of Turkey’s troops from Serbian towns. Although very young, he has shown political and diplomatic skills which helped the progress in his career. He was named the minister of foreign affairs in the period between 1867 to 1888, the prime minister of the Principality and the Kingdom of Serbia multiple times. He was appointed a member of minor Prince Miahilo’ council of regency from 1868, and in 1889 as a member of King Mihailo’s. As Prince Mihailo’s regent, he mostly contributed to passing the new constitution in 1869. Jovan Ristić obtained great advantages for Serbia at the Berlin Congress in 1878 when the independence of Serbia was proclaimed. In 1881, he refused to sign the bilateral agreement with Austria-Hungary, considering it would make Serbia financially dependant of the Monarchy, for this reason he resigned the position of the prime minister. After returning to power in 1887 and later as King Aleksandar’s regent, he strived to enable Serbia to rely on Russia. He resigned regent position in 1893.

He was a regular member of the Serbian royal academy and for a certain period of time, its leader
1899.

Jovan Ristić was married to Sofija, daughter of famous merchant and landlord in Belgrade, Hadži-Toma. They had four sons and a daughter: Nikola, Mihailo, Milan and Aleksandar.